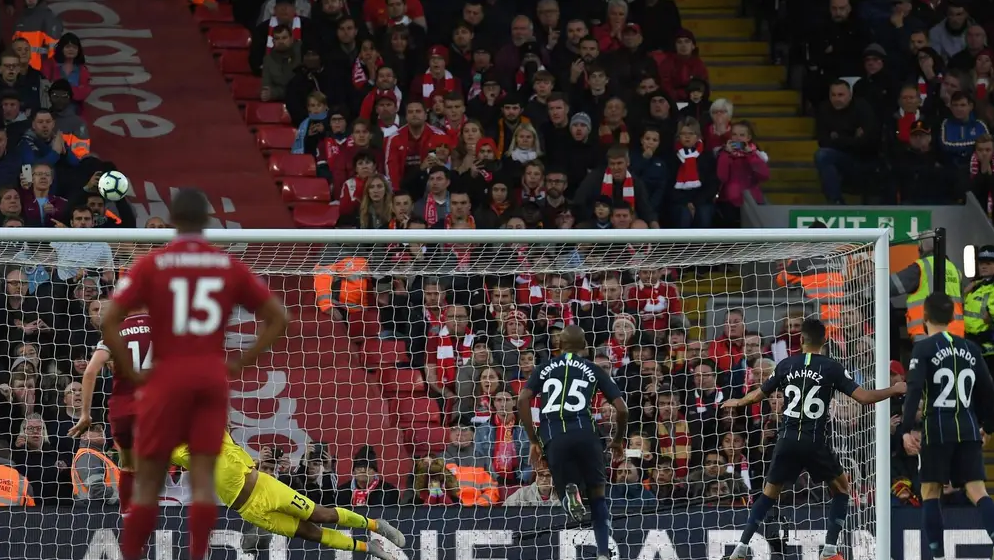 Liverpool’s visit to Man City on Thursday evening is hardly short of narratives .

Is Fernandinho’s return the answer for the wobbling champions? Can Virgil van Dijk prove his pedigree against the best attack in league? And is Jurgen Klopp really Pep Guardiola’s kryptonite?

All these questions are likely to be answered one way or another when the two teams face off in what is sure to be an engrossing encounter at the Etihad Stadium.

But, true to the good fortune that has fallen their way at times this season, it is the one that pits Liverpool’s biggest strength against the opponent’s biggest weakness that looks most likely to be decisive.

During a festive run that featured – somewhat unthinkably – three defeats in four league games, reigning champions City were dogged by issues in the full-back position

Firstly, a 3-2 home defeat to Crystal Palace saw Kyle Walker run ragged on the right-hand side of defence.

The England man failed to close down Jeffrey Schlupp for his well-taken opener before conceding the penalty that allowed Luka Milivojevic to make it three as Roy Hodgson’s men took the points.

And when Danilo took Walker’s place for the visit to Leicester City four days later, it only seemed to transfer the problem to the opposite flank.

Fabian Delph was the man enduring a day to forget this time around, the Englishman completely losing Marc Albrighton for the equaliser and then picking up a late red card for a frustrated challenge on match-winner Ricardo Pereira.

Delph’s subsequent suspension meant a chance for Oleksandr Zinchenko against Southampton in the following game but, while City got back to winning ways, Guardiola received yet more reason for full-back concern.

The hosts’ goal – ultimately a consolation, of course – saw Zinchenko robbed of the ball by Pierre-Emile Hojbjerg, who drove at the box before thrashing a strike past a helpless Ederson.

It was the sort of passage of play that would have left Klopp licking his lips as he prepares to unleash a high press on the champions on Thursday.

Concerns over Zinchenko’s inexperience have led to suggestions that Danilo could start at left-back against Liverpool, with Walker returning on the right as a result.

But with Sadio Mane and Mohamed Salah set to line up on either flank for the Reds, neither is in for a comfortable evening.

There isn’t a defender in world football who would relish coming up against that fleet-footed pair, while Roberto Firmino isn’t shy of drifting wide to chase down the ball, either.

Should Guardiola find a way to protect both full-backs from the pace and fury of Liverpool’s attack, it will go a long way toward keeping City in this title race.

Who will win? Thanos vs. Game of Thrones Night King

ODD: Nasa to consider putting Michael Jackson on the Moon