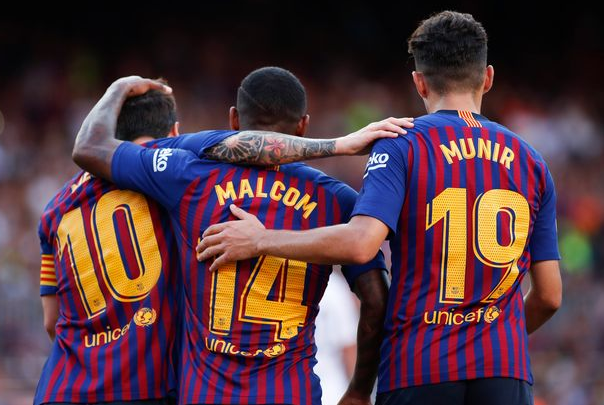 The Brazilian forward only joined the Catalan giants in the summer transfer window, snubbing Roma at the eleventh hour before flying to Spain.

Barcelona splashed out £37million on the 21-year-old from Bordeaux, and he made a lively start during pre-season, but has since gone off the boil.

This campaign Malcom has featured just nine times for Barcelona, while Ousmane Dembele – who looked like he could be on his way following the Brazilian’s arrival – has made 16 appearances in La Liga alone.

Malcom may be looking for a new challenge this January, and one club ready to hand him an olive branch is Guangzhou Evergrande, according to Goal.

The Chinese side, managed by Fabio Cannavaro, have reportedly made their interest official and see Malcom as a perfect replacement for Alan, who could be on his way to Galatasary.

Malcom has previously been linked with a move to the Premier League, with Arsenal supposedly at the front of the queue.

The winger spoke out to dismiss speculation of a move back in November.

He wrote on Instagram: “About news that came out here in Spain, I want to clarify this: I came to Barcelona with many objectives, and those who know me know that I am a very determined person.”

Space tourism is coming by 2020, and this could cause havoc to Earth

Trump said to ban Huawei in the U.S.